We Specialize in Restaurant Websites

Barrels and Boards is a unique whiskey & wine barrel-themed restaurant & bar serving upscale comfort food. They needed a company which specializes in restaurant websites and they found it at Wicked Modern Websites.

Barrels and Boards is a hip and attractive Whiskey barrel-themed comfort food restaurant. When they needed new Restaurant Websites they decided to work with Wicked Modern Websites.

Wicked Modern Websites is proud to be the official Restaurant Websites Design Company of Barrels And Boards to help diners find this amazing culinary option.

Here at Barrels & Boards the staff works hard to provide our guests with fresh, quality food, along with fast, friendly service, in a comfortable, cozy setting. We offer an eclectic menu featuring all your favorite comfort foods as well as a premium selection of whiskeys and bourbons. Barrels & Boards Restaurant and Bar-comfortable dining with small-town touch! 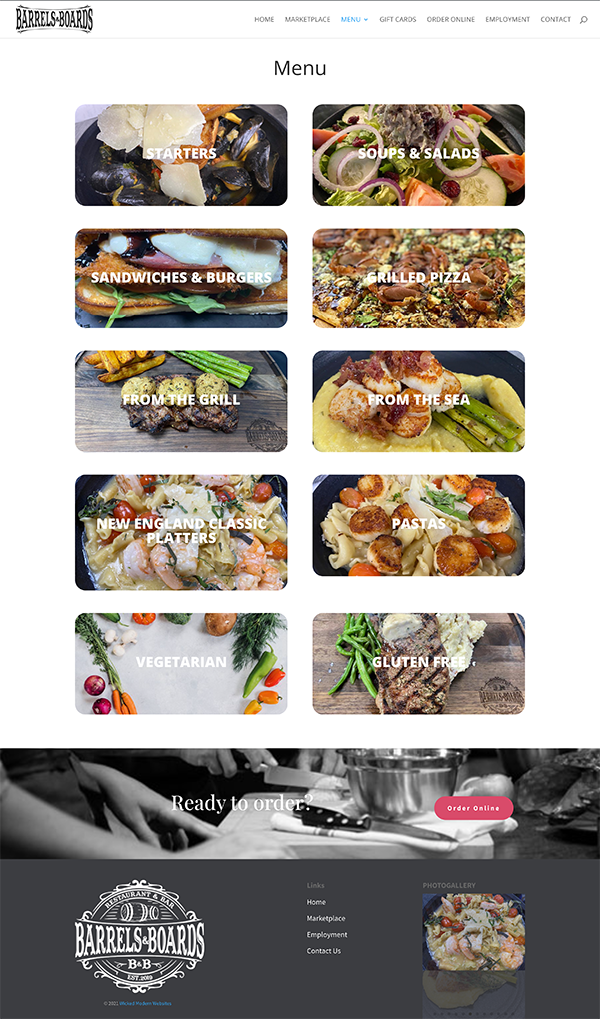 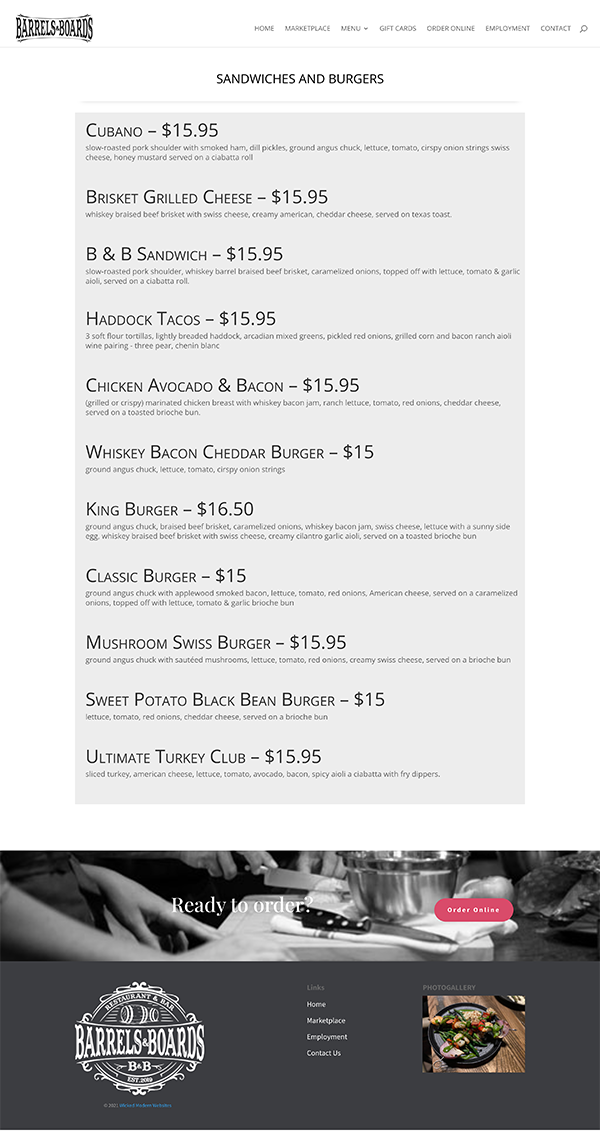 “Wicked Modern Websites built and maintained our website for us from start to finish and beyond. They were responsive & creative while taking our feedback and putting it into action. Thank you for being a website developer we can trust!”

A much more effective site, in a few days!

Andrew made me a much more effective site within a few days. He is always very responsive to my many questions and his advice has boosted the traffic to my site significantly. Thanks so much. I highly recommend! Melissa Depasquale

Excellent at listening to our needs!

Andrew designed our website from start to finish. He was excellent at listening to our needs and transferring it into a finished product. His experience and expertise guided us in a great direction in regards to incorporating social media into our website. He is a pleasure to work with and gives great insight.

Andrew consulted me in two business ventures and the results were outstanding. He also offered at no cost suggestions on other areas that would benefit my business such as web optimization to increase relevance and traffic on the web. I highly recommend Andrew to anyone looking to grow their brand.

Andrew consulted me in two business ventures and the results were outstanding. He also offered at no cost suggestions on other areas that would benefit my business such as web optimization to increase relevance and traffic on the web. I highly recommend Andrew to anyone looking to grow their brand.

Andrew Peterson is passionate about projects and endeavors he undertakes, and this makes him most effective in the realm of website design, website development, and social media. After being floored by the effectiveness of his work in developing a website and Facebook/Twitter presence with the Easton Children’s Museum, I recommended he talk with a local non-profit “School on Wheels of Massachusetts” (SOWMA) and for-profit “Shaw’s Center/Campanelli Stadium” to deliver the same. SOWMA and Shaw’s Center were equally impressed with his capabilities, his depth of knowledge, and his unwavering commitment to projects he undertakes.

From the enterprise news

RAYNHAM — A year after opening, Barrels and Boards has plans to open a marketplace attached to the restaurant and a function hall.

The B&B Market Place is expected to open sometime after Christmas at 1285 Broadway. It will have fresh, upscale quality meat and fish, bakery goods and grab-and-go meals for sale.

There are not many small markets in town or the area, so Barrels and Boards saw a need to open its own, Laghetto said.

People can taste the difference when they buy a steak from a butcher or marketplace versus from the grocery store, he said. That’s also due to the way the animal is raised, he said.

Some of the products will be from local sources, like free range chickens from Feather Brook Farms in Raynham and potentially beef too, Laghetto said.

“Any time you can do local stuff, it’s a good thing,” he said.

The the marketplace’s space was previously a Honey Dew Donuts. The market will use the convenience store’s drive-through for pickups.

Laghetto said the marketplace will have its own kitchen where grab-and-go meals like sandwiches, pasta or pizza can be prepared.

The marketplace and the restaurant will be attached.

Customers at the restaurant are thrilled about the market, he said. When information about it was shared on social media, people also responded well.

In addition to the marketplace, the restaurant will open a function space that can hold business lunches, graduations, baby showers and other community events.

Laghetto said that space is expected to open around the new year.

The opening of the marketplace and function hall comes about a year after Barrels and Boards opened.

The restaurant, which has a whiskey barrel theme, was formerly Christopher’s Lounge. It serves comfort foods like burgers along with meals like pasta and steak.

Laghetto said everything felt new when the restaurant opened and then they had to find ways to adapt to measures enacted by the state relating to the COVID-19 pandemic.

But, he said, the restaurant has been lucky and has been able to do takeout, outdoor dining during warmer months, and now indoor dining.